If you catch and I verify a mistake in one of my books I will post it here. Corrections will be published in 2015 with the publication of my book, The Kenpo Karate Compendium.

February 2013
On page 29 of Kenpo Karate 601, referring to Entwined Lance, I was asked how the “rear” hand is doing the parry/check when it’s technically the “front” hand doing that in the form. As it’s difficult enough to write about motion to describe it, I was caught in a quandary. If I wrote it was the front hand, some would interpret that at as the right hand. Sticking with the technique description of picking up the line with with the rear hand seemed to be the best choice.

June 2012
In Kenpo Karate 501 it states on page 26, last paragraph, that you enter Brushing the Storm with your right hand chambered. In the technique it’s done from the “hang” position. You can drop the hand to the hang from the push down or go thru the chamber transition. Either way is ok but you’ll probably find it easier and more congruent to drop to the hang.

In Kenpo Karate 201 on page 5, paragraph three, it says “…Seven, the club form and Eight, the stick

form.” It should read that Eight is the knife form. And the terms “stick” and “club”were used

On page 11 it says “…the left hand can be wrapped over the left…”. Obviously, that should

Marc Sigle and Claudia Neumann in Germany caught these errors.

June 2009
One of my books tells of being in England and teaching a technique only to hear a participant groan and say they had changed it after the last visiting instructor had said it should be done their way. My point was that you don’t make changes without thinking them out first. I received the following e-mail from a man who says he was the person I wrote of.

Dear Mr Wedlake,
These are very informative books. I do remember you coming to Exeter in the United Kingdom it was myself and my friend Chris Legrande gave the groan when you showed us the techniques by the book and we had to re-learn them the old way, so I did find that bit in the book very funny. In fact after your visit when someone had certain punchiness or snap to the performance of there forms everyone would nod approval and say “Hmm he’s doing a Wedlake”.
The form outline and guidance books are a sheer masterpiece. Everyone tonight at the club has noticed a certain dynamic that has suddenly appeared in my forms over night. Perhaps I am remembering to do a “Wedlake”.
Have you thought of doing the same or similar thing for the sets. I’m sure they would be another benefit to all us Kenpoist’ out there.
Its a real pleasure reading your work.
Yours Sincerely
Moon Kinnaird

February 2009
The cover of Lessons with Ed Parker has a mistake which will be corrected on the next print run. Can you spot it?

June 2008
Alert reader Marc Sigle caught the mistake in Kenpo Karate 301 on page 42. The Crossing Talon sides are reversed. It should be done with the right hand (left side) of the technique to start.

October 2007
Si-bok Tom Kelly was the Executive Vice-President of the IKKA for many years. He managed the Santa Monica school for Ed Parker and was known as Mr. Parker’s right hand man. I’ve known him for years but we had a chance to sit and talk for some hours at the WKKA camp in Baltimore. He asked me to make a correction regarding Mr. Chuck Sullivan and the Staff Set. Mr. Sullivan modified an existing staff set to make ours. I believe I wrote in one book that he created it. I have seen video of the original set and agree with Mr. Kelly’s comment.
In addition, it was Tom Kelly who created the Kicking Set, now sometimes known as Kicking Set One.

Feb. 2006
The flight instructor who taught me to fly and signed me off for my private pilot license found me in Florida. I hadn’t spoken to him in about 15 years. His name is Steve Bonk and he still lives in the Chicago area. Steve is a biker, too and he informed me that he’s taken up martial arts at the age of 55. The best part is that he’s taking Kenpo. Like a good martial art instructor, Steve pounded strong basics into me. Learning to fly is like learning kata, and it requires understanding of principles. It’s paid off in ways beyond being a solid pilot. It’s allowed me to achieve goals. And like they say, “Superior instruction gets superior results”. Thank you, Steve.

March 2002
I had lunch with Carole Wolken-Melcher ( one of my first judo teachers) and her husband, Dr. George Melcher in Ft. Lauderdale. “Yes, I see the little boy’s face” she observed as we walked from the parking lot into the restaurant. This was like seeing long lost family. I did not know yet but a surprise was to come. After we sat and ate, Carole said “I have something for you”. She pulled a bag out of her purse and handed it to me across the table. “I knew you would appreciate it” she said as I opened it. Her black belt was in the bag. The very same belt I had seen her wearing the very first time I had seen her when I was a young boy. The image of her in the white judogi was burned into my mind back then, and I vividly recall the black belt with the white stripe running through it. (For today’s students, the white stripe back then was woman’s belt. In the US today, you see belts with all kinds of stripes, but back then men and women wore different belts.) You can imagine my surprise, replaced immediately by the sense of honor and compliment that goes with this type of gesture. Carole’s belt joins those that have been passed down to me by Frank Trejo, Huk Planas and Ed Parker. 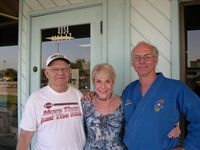 In Kenpo Karate 101, page 127, I refer to a gang initiation rite which supposedly requires following anyone who flashes their headlights and killing them.  A reader forwarded a web address which is a debunking site for the modern day urban myths.  This is addressed at www.snopes.com

Terry Robinson is the man Ed Parker credited with opening doors for him in Hollywood.  He is mentioned on page 90 of Further Insights.  It turns out that I ride motorcycles with a man named Peter Campo who trained with Terry in California.  Terry is still alive (and weight training) and Peter still keeps in touch with him.

In a photo on page 91, I left out names of people.  That is Ed Parker’s first black belt, James Ibrao, standing on the right.  You do recognize that name, don’t you?

A letter from one of my black belts in Hong Kong, Peter Boczar, has a better translation of what the term “di da jow” means, as referred to in my books:
“By the way,  I enjoyed the book.  You’ve always had a personal, honest writing style that engages in a way that makes it feel like you’re there telling the story yourself.  As a Kenpo practitioner, it was especially relevant for me, but I think it offers a lot to the greater martial arts community, because it cuts through the mystery and exotica and in real terms explains what it’s all about, so people can truly learn and make informed choices.  also, for someone coming from “traditional” kung fu styles like myself, that’s exactly what the kenpo system did for me.. It allowed me to appreciate what I had been taught, but never learned elsewhere.”
“Also, Dit Da Jow really means “falling down, hitting, wine.”  Also, that’s the Cantonese pronunciation .  I don’t know what the Mandarin would be.  Many Kung Fu terms have historically been based on Cantonese, since Hong Kong/Cantonese/southern China has been the source of most of the emigration from China over the last 200 years.”

“Jow” is generically used to refer to many traditional Chinese medicine potions as the herbs were typically dissolved in rice wine.  However, note that this wine is poisonous to drink.  There is a variation that is drinkable, but it’s not a liniment and used for internal bruising.  In this version, the herbs are pressed into a small one inch brick that is sealed inside a wax ball.  The herbs are steeped in boiling water and drunk as tea. One more thing… where did you get the formula for this?  That’s one of the most closely guarded secrets of all Kung Fu Sifu and Chinese grandmothers.  And in Hong Kong, they don’t even sell the “homemade” stuff anymore.  You need to have it applied by the master… I’ve heard that the “best” recipes require the potion to ferment in a cold, dark place for several months and use vodka instead or rice wine as a base solution…

After almost 30 years, I have reconnected with my first Judo teachers.  I received a phone call at my studio from a man who wanted to know about my first martial art experience in Chicago.  That man on the phone was my first Judo teacher’s son, David.
Dave and I had been good friends for years, up until I moved away in high school.  I saw him once or twice after, then we lost touch.  Dave still lives in the Chicago area and had recently started to take up karate.  He picked up a copy of Black Belt magazine, which coincidentally had an article in it which I had written.  He took a chance that I was the same guy and called.
Dave told me his father, who owned the Shindo Kan school in Chicago, is still alive.  He also informed me that Carole Wolken, the lady black belt I talk about on page 26 of Kenpo 101, is still alive also and living in Arizona. Carole contacted me and we have been corresponding.  As one of the many kids a that studio, she only had a fuzzy memory of me, which is to be expected.  I was excited to be able to thank her, after all these years, for what she did for me as a youngster.
Tom Bleecker’s new book, “The Journey”, in my chapter, has not only a picture of David and I on my front lawn, but a nameless mention of my first meeting with Carole.  (Another odd coincidence was that, the day I got the draft with the photos from Tom Bleecker and saw the picture of Dave and I on the first page was the day he called me.)
There is a lesson in this for us all, especially those of us who work with children.

Kenpo and Jeet Kune Do – A Comparison